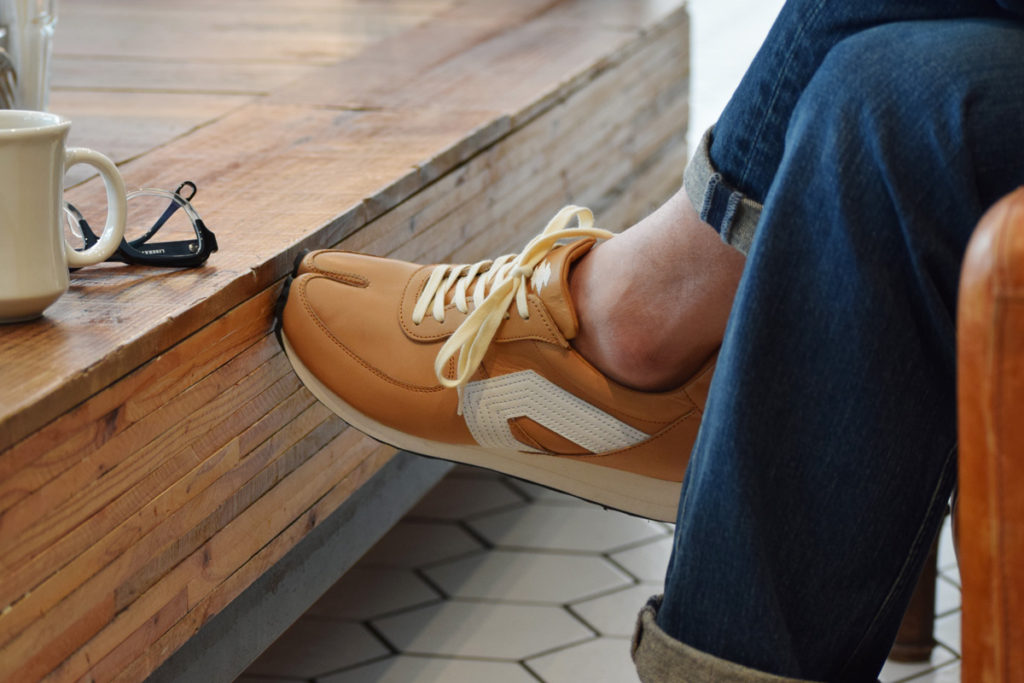 Generally, the soles of jikatabi are thin and the uppers are made of cloth. Therefore, compared to shoes with thick soles, they can convey more information from the ground through the sole and make it possible for you to be well balanced even in places with bad footing. Moreover, taking advantage of its unique shape by dividing the big toe, which has a separate directional movement from the other four toes, jikatabi makes it possible to move your feet with higher maneuverability and more flexibility than shoes and utilize the advanced toe-function which originally belongs to human feet.

From this reason, jikatabi became quite popular as working shoes for such people as farmers, miners, carpenters and steeplejacks, and its sales met its peak during Japan’s period of rapid economic growth. Not only as working shoes, they were also used by the army and the navy as well as by track and field Olympic athletes as sports shoes from their high performance over a period of time. However, the spread and expansion of the shoe market soon lead to the decline of the jikatabi market, and jikatabi had lost its demand in modern times.

With its decline, the history of jikatabi being shorter than a century, its evolution did not last long and was not active enough, in contrast with “shoes” that kept evolving with diversity and variety together with the progress of civilization and unfortunately lead to the loss of its place within the market very quickly. In a sense, it can be said that it had lost its own value and worth of existence by itself. Whereas there are those that regard civilization as something that aggressively evolves but culture as something that is more persistent and unalterable; culture in reality advances along with human lives that actually transform together with the progress of civilization. Things that are needed continue by evolving and at the same time those that are not needed simply are abandoned and forgotten. The relationship between culture and civilization may be something very dry and rational.

Regarding our contemporary lives, when asked whether the value of jikatabi has fallen to something worthless to be distinguished, I say no. If jikatabi could only change and adapt according to the flow of time or the change of lifestyles, I trust that the value of jikatabi would be able to attain appreciation once again more than that of shoes. The reason is because jikatabi has had such rational functions that can overwhelm the conservative spiritualism which Japanese clothing culture sometimes cling on too much. Jikatabi in fact was an invention that was made possible by an advanced civilization at the end of the Meiji period (1868-1912) when Japanese traditional tabi (socks with split toe) met and fused with rubber that was the revolutionary material industrialized by Western civilization. In that sense, jikatabi is the product that symbolizes fusion of culture and civilization, and at the same time, creativity of hybrid minds of Japanese people.

It is not smart for us to let such an interesting product to just extinct in less than 100 years since its birth. After inventing such revolutionary footwear, we Japanese probably would not have the right of saying “Mottainai” (such a waste) if we were to simply put it in a museum showcase as a legacy of Japanese clothing culture. There are those who misunderstand that jikatabi is footwear of old ages, but compared to “shoes” which have been around even before the Christian era, you should consider that jikatabi is a new comer to the history of footwear, and that it should, in fact, be considered as contemporary footwear. There are those who sell jikatabi calling it “Ninja Shoes”, but historically jikatabi did not exist during the era of ninja. Even Ryoma Sakamoto (1836-1867), who had a very liberal and enlightened mind who wore leather boots together with hakama (a style of traditional Japanese clothing) and carried guns instead of katana (Japanese swords) at the end of the Edo period, had never witnessed such a revolution in the Japanese footwear industry. Now, the fact is, jikatabi, equipped with new materials brought by a new industry in the early 1900s, is a product of the modern age and, in this sense, can be considered as future-oriented footgear. Therefore, it can also be said that jikatabi is one of the clothing cultures that are destined to evolve freely without being fettered by convention and stereotypes.

Yet, unfortunately, jikatabi did not evolve much after all. In the meantime, people’s interests completely moved on to shoes. However, there is nothing to be pessimistic about. It is simply that jikatabi has been a little silent for a while, overwhelmed by the rapid spread of shoes along with the emerging western clothing culture in Japan, and eventually has refrained from evolving by itself. Now it’s about time to move on to the future-oriented progression after decades of a standstill with its innate spirit of revolutionary footwear.

This season Yoshiyuki proposes jikatabi for urban life. Since it is not for working in high places, the soles are not thin. Rather, comfort has been sought in an urban environment where the ground is mostly hard and stiff. By sandwiching EVA (a shock absorption material) with Vibram’s high grip blocker sole, it makes it easier to walk long distances on asphalt and concrete surfacing. This is also one of the concepts of Yoshiyuki’s jikatabi. I believe that this will also satisfy “shoe people” who have never thought of using jikatabi within their lifestyles. I would be very happy if people who have lost sensitiveness for their toes can experience the new feeling (or rather re-experience the truer feeling) of walking. 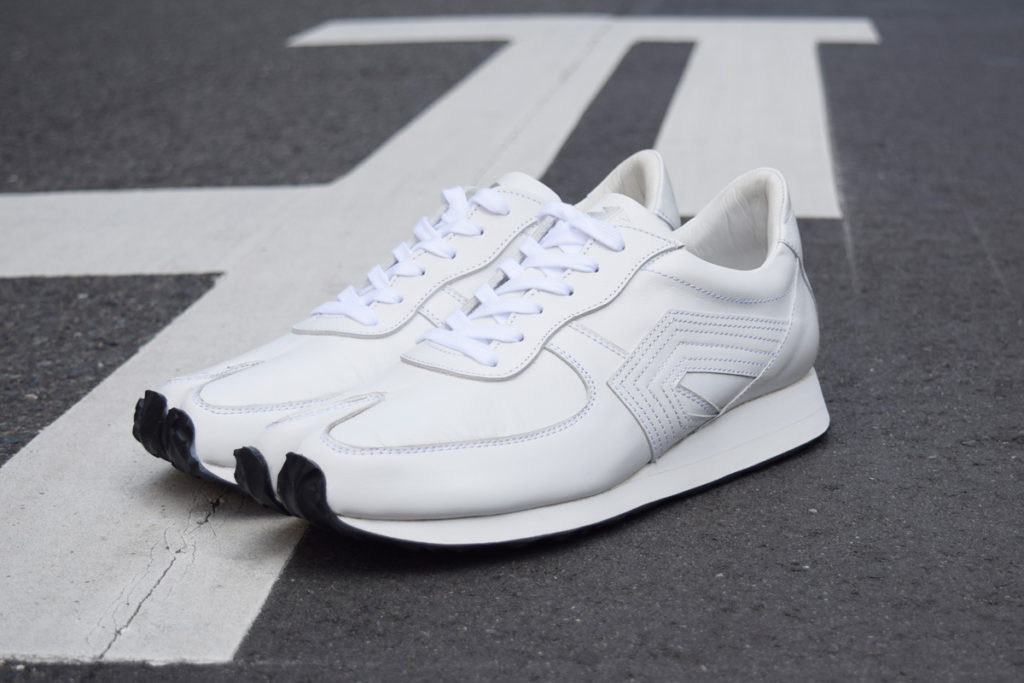 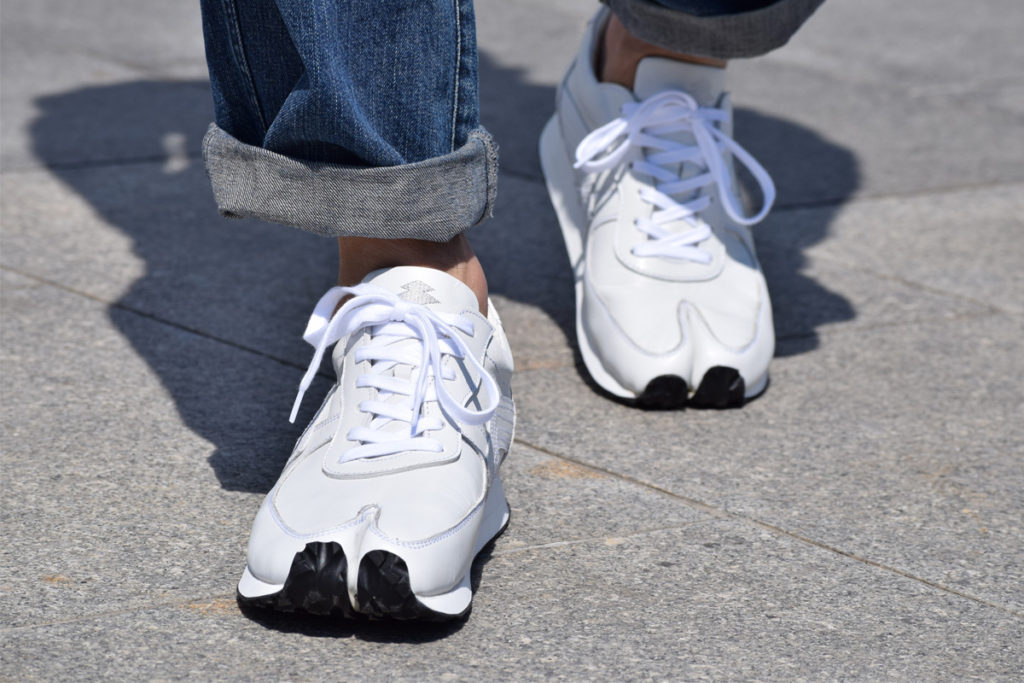 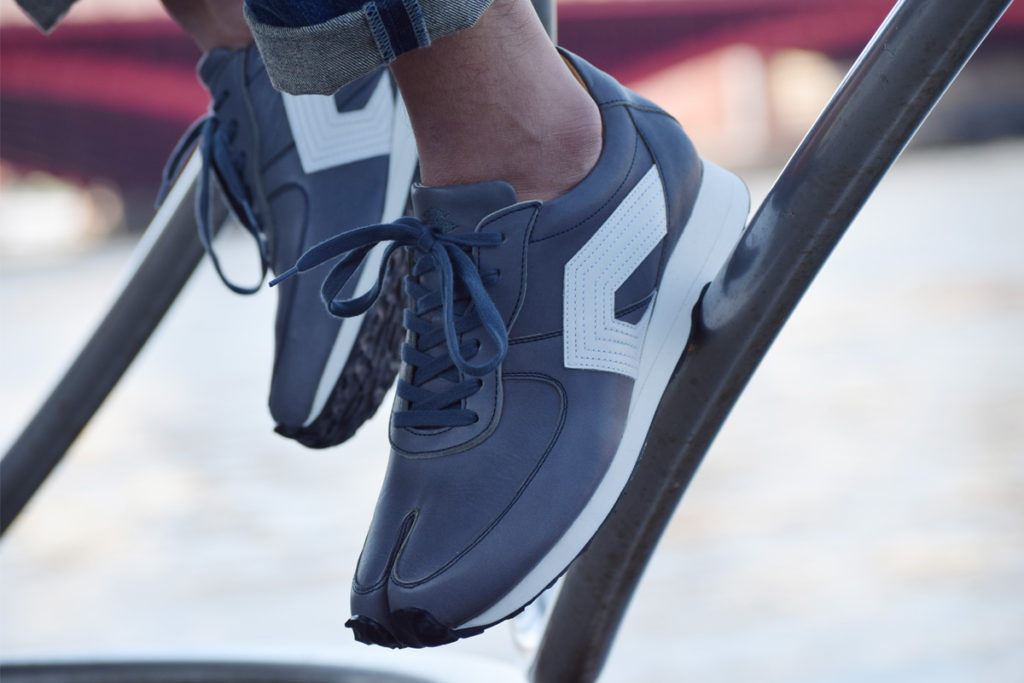 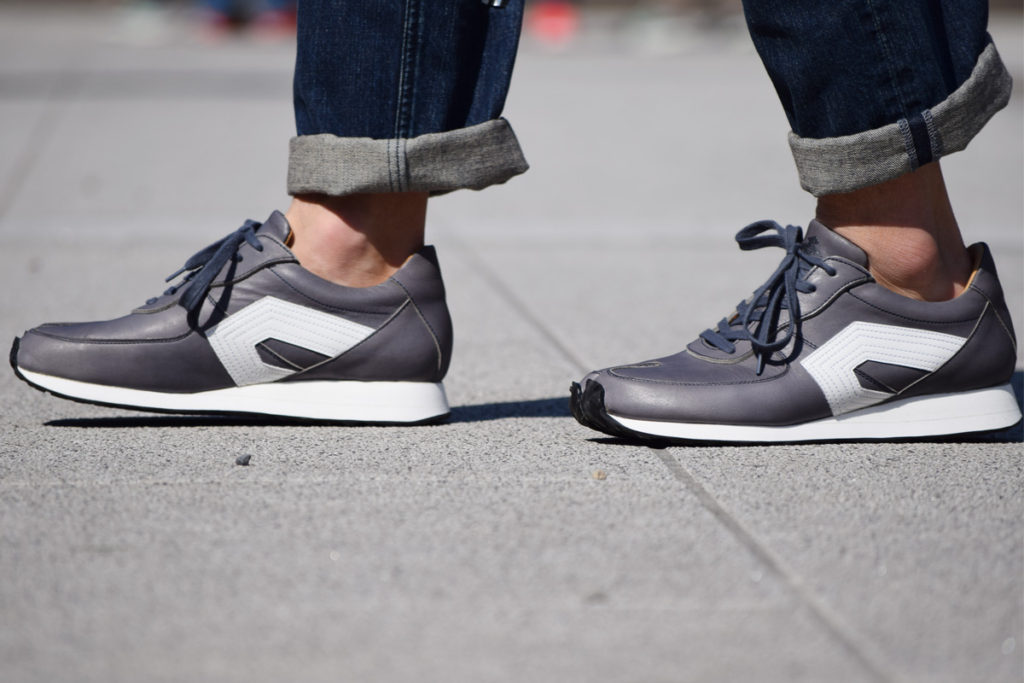 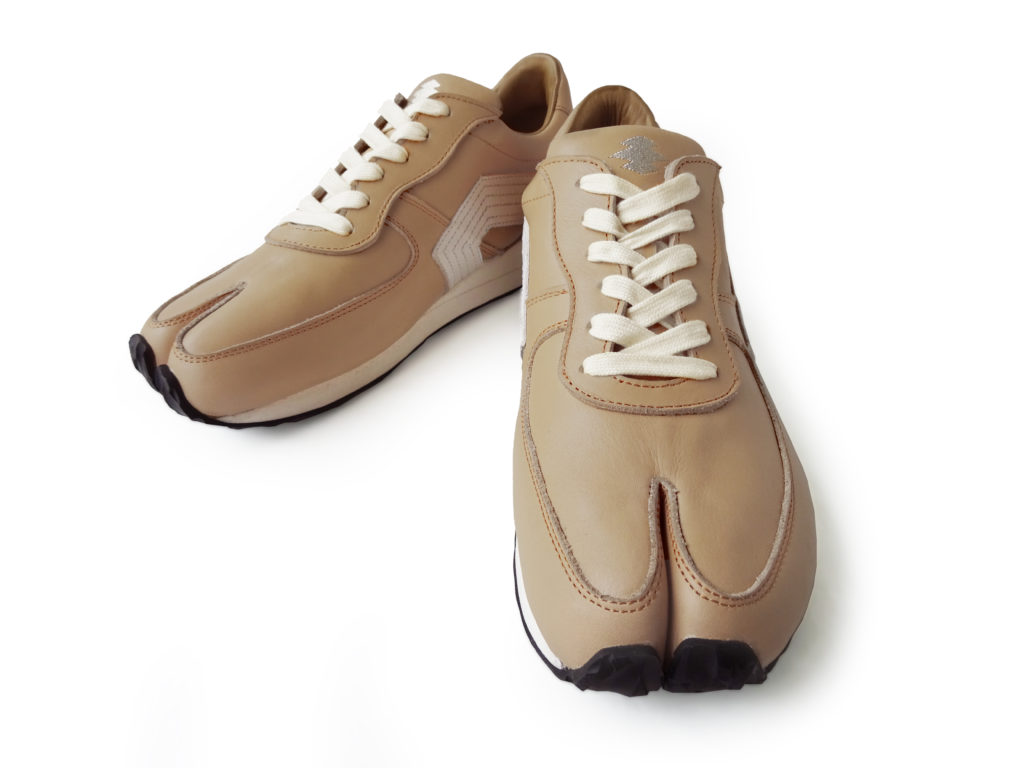 Asuka features a premium leather upper and horse leather lining with Vibram blocker sole to offer sporty style for urban use, inspired by old-school classic sneakers with a 6-hole lace up closure. Intentionally not making the mid-soles too soft for people living in urban environment where the grounds may be very hard, the fit has been designed to be slightly hardened. The interior lining and inner sole use horse leather for pleasant touch to the skin and releases humidity for prolonged wear and comfort. 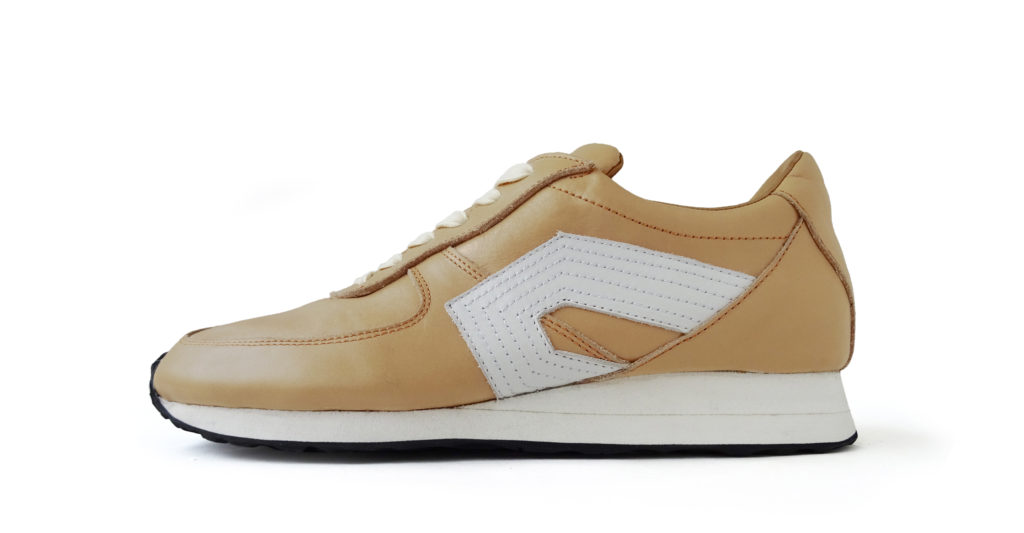 The “Peeping Kikko” patterned leather patch placed on the sides of the upper is the signature of Yoshiyuki.